Like most of you, safety is one of my top priorities and most homeowners don’t know it, but they have a safety issue right at their front door and that is with your deadbolt.

Most likely your deadbolt itself that’s in your door it’s fine. It’s actually the strike plate.

A very quick check that anybody can do, you can do it right now. Take a Phillips head screwdriver and unscrew the screws on your strike plate and see how long they are.

If they’re only one inch long, that’s not enough. That is a weakness!

You’ll see sometimes, maybe in a police report or a movie, somebody will kick the door in. That’s real, that actually can happen. It’s pretty easy to do if you only have those one inch screws.

Because the strike plate itself is only holding on to what’s called the door jamb. See Best Door Jamb Security Plate.

It is not attached into the 2×4 or the frame that’s right behind it.

The nice thing is this is very easy to fix with two three-inch general construction screws.

These specifically are not a Philips head. These take a T25 Torx bit.

The screws I’m using do not have a little notch at the end which is called a pilot point.

I am gonna use a 1/8 of an inch drill bit to drill some pilot holes before sinking these into the two by fours.

If you have just a couple minutes, you can make your strike plate about 10 times more secure than it is today if you only have those 1 inch screws.

First up we’re moving the top 1 inch screw out. I’m only gonna do one screw at a time so I reduce the chances of miss aligning the strike plate and having issues with the deadbolt going through it.

So 1 inch screw out. 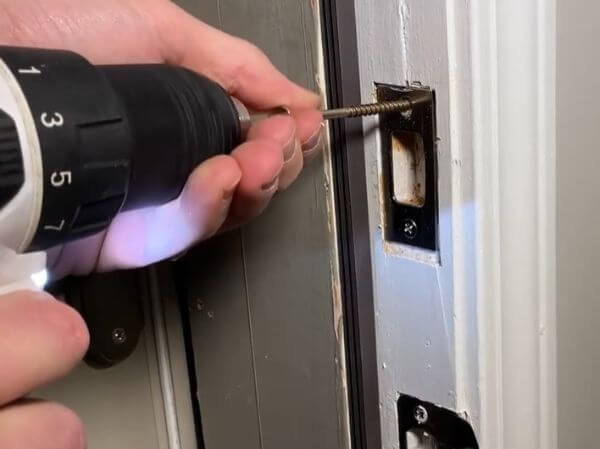 Again I don’t want to miss alignment so I’ll take my time.

So just repeating the same steps on the bottom with the 1/8 inch drill bit for the pilot hole. Now we get the bottom 3 inch screw and sink it in.

It’s really this easy. There’s not much to it.

Snug this one up and go back and forth.

If you’re using general construction screws, these usually won’t be perfectly flush with the surface, but should clear your door.

Check there is no misalignment, check that deadbolt goes in. If you do have an issue with the deadbolt not going through the strike plate, you’ll need to correct that issue.

That will take you just a couple minutes and two three inch general construction screws.

Makes a world of difference in terms of the security at your front door.

If this is not enough and you want to go to the next level, your next project should be to install a security plate which will have the holes for your door latch and also your deadbolt.

It will take you to multiple levels up in terms of security. See te best entry door reinforcement kit.